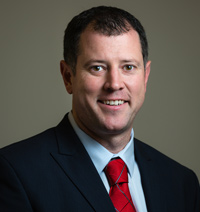 He received his undergraduate degree in Health Science from the University of Florida and his Master's in Physician Assistant studies from Baylor College of Medicine in Houston, Texas.

He has worked with Dr. Kreuzer from 2006 to 2012, followed by a four year tenure practicing Orthopedics in the Philadelphia area. In 2016, Kevin happily returned home to the Houston area to rejoin Dr. Kreuzer at Inov8 Orthopedics.

He became interested in orthopedics because he believes that it’s a field that has a high impact on a patient's quality of life. He finds it rewarding to assist individuals in returning to the activities that they enjoy, while ridding them of pain and restoring function.